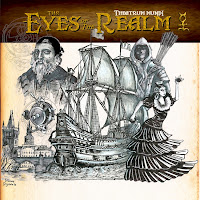 Theatrum Mundi first formed in 1991 when the trio of Michael Ray Gould, Li'Anne Drysdale, and Todd Easton self-released an limited run of an album of symphonic metal in Springfield, Missouri. Their idea was to combine the symphonic rock of Renaissance and early Moody Blues with the metal of Queensryche. Years later, after hearing the music of Nightwish and Evanescence they realized they had been part of a musical zeitgeist, and decided to reform the band with new players. Purchase the Eyes of the Realm.
Posted by Michael R. Gould at 8:12 PM